Nepal At a Glance

The national language is Nepali- However, educated people can understand and speak English as well. Time: Nepal Time is GMT+05:45 i.e. 15 minutes ahead of Indian standard time.

Nepal can be visited the whole year round.

Nepalese people are mainly divided into two distinct groups; Indo-Aryans and the Mongoloids. Kathmandu Valley is the spiritual and eultural meeting point of all these groups. Hindu temples and Buddhist shrines are scattered all over the country. Nepal is the birth place of Lord Buddha, the Light of Asia, There is a complex blending of Hinduism and Buddhism in Nepal. Nepalese people depict the character of all necessity character that one should posses in offering service-Sincerity, faithfulness and reliability are the inborn instincts that gives the prominent introduction about Nepalese people. Gurkhas are the distinct instance of faith in Nepalese manpower abroad. In addition, 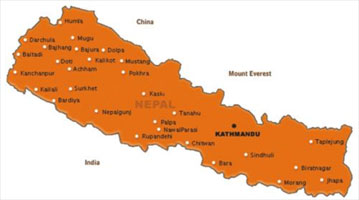